In Case You Missed the JACK Launch

Here are some of the highlights: 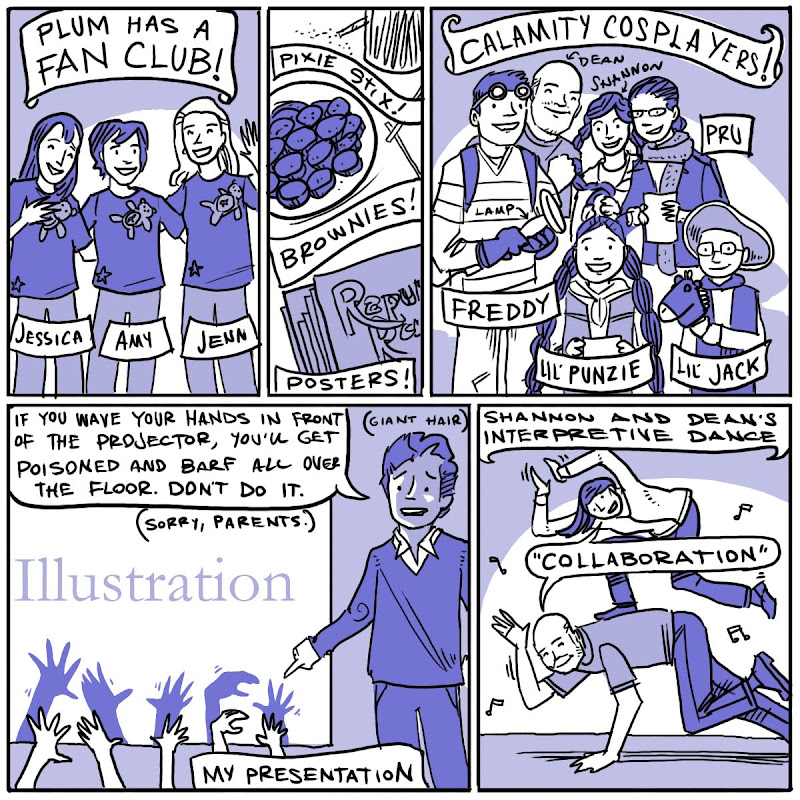 We had a great turn out--even bigger than the RAPUNZEL'S REVENGE launch two years ago. Hardcover CALAMITY JACKs were on hand (the first I've seen!) and everyone had a good time. Shannon and Dean really did do an interpretive dance, which you will have to request if you see them at another signing (they'll do it! They really will!) And I did a Powerpoint presentation on illustration (only terrifying a few children...)
Thanks to everyone who came!
Double thanks to everyone who came in costume!!
Triple thanks to Jessica Day George, Jenn Mattson and Amy Finnegan who made home-made Plum T-shirts, forming, as far as I know, the world's first Plum Fan Club. (Hooray!)
And a special thanks to The King's English bookstore for setting it up and hauling all the books!
I'll let you know about any other signings coming up--I know we'll be at The Purple Cow Bookstore in Tooele, UT (a place I've never been) this Saturday, the 16th.
CALAMITY JACK is officially launched! (Two more days to get those book pics to me for an avatar--Tuesday's the deadline!)
Posted by Nathan at 2:43 PM

Unfortunately my order for "Calamity Jack" goes out on Tuesday. Oh well! I am excited anyway!

Here is my post about the launch. So fun to meet all of you!
http://fireandicephoto.blogspot.com/2010/01/calamity-jack-launch-party.html

Rats. I missed the interpretive dance. How you taunt us!

Something about Plum's round black eyes just speaks to me. . . What more can I say? The Purple Cow is AWESOME by the way. I've done two events there, and they always have a great turnout and do a bang-up job.

Thanks for letting us know how it went--sounds like it was a riot!

Calamity Jack is winging his way here to me.

Oh, hooray! I still have a chance! All the Ogden area bookstores let me down and I had to order it online. I have two days for it to get to me!

To everyone who's just getting/ordered JACK: If you really want an avatar, just send me your book pic when you get it. I won't be able to say no if it comes in a few days after deadline.

FireandIce: Thanks for the great write up!

Q: I'm pretty sure Shannon and Dean will do their dance on demand. If you see them, ask them do to it.

Jessica: Plum's being smashed into a window right now on today's blog-comic! He's here for y'all. And I've heard good things about this Purple Cow--looking forward to it!

Also, do you have plans to post your carbon-14 dating graphic novel? I feel like that's the kind of excitement your blog needs.

I want to be in Plum's fan club. Then I will become an obbessed fan and start sending him used retainers for when he and Yellowbelly play orthodontist. It will then only be a short time before I'm hanging out at playgrounds ready to snatch that little purple sung-a-bun when no one is looking.

Did I mention I'm stoked that we made the blog? I can't believe how much cooler I look as an animated Freddie-wannabe.

Oh, your THAT Chris. You most certainly made the blog! Great costume! Chris was the Freddy cosplayer, lamp in hand.

Yay, the Plum Club! It's his silent complicity in all of Yellowbelly's fun that I love about Plum.
I can't believe I'm (so flatteringly I must say) rendered in animation! It's a lifelong ambition of mine. Now what will I aspire to?
In my next life, I wanna draw like Nate Hale.

This all looks like so much fun it makes me want to move on Utah just to be on hand for this kind of excitement!

Thanks for including my kids in your graphic depiction of the launch. They were so excited, we printed off the drawing and they both took it (with their signed books) for show-and-tell on Friday. They feel famous!