The Blue Streaks of November

I like to keep careful charts and graphs of big projects I work on. Here's my November wall calendar for Hazardous Tales #3: 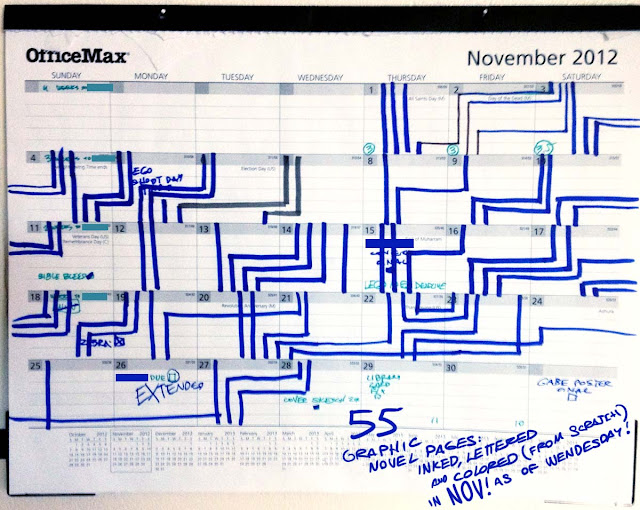 Each line represents a finished page. When a line touches the top of a day, that means a page is done. So on the 1st, those are three pages I started and finished in one day. Most other pages get spread out. There's a page on the 21st that doesn't get finished until the 26th. The key is to have some pages finishing each day.

I'm also showing this because it is an UNREAL number of pages for me. This is my all time personal record for completed pages in a month. I want to try and hit 60 before December. I'll keep you posted.
Posted by Nathan at 5:59 PM 4 comments:

I had a pretty good streak there for the last few months. Wrecked it this week by missing Monday, Tuesday, and, phew, Wednesday. Yeesh.

There was a big Hazardous Tales book three deadline on Monday. I had a real crunch. That deadline has now been extended for a few more weeks, meaning posting may be sporadic.

I'll try to stay out in front of it. And I need to finish this Sales Meeting story. Just bear with me, we'll right this runaway deadline train.
Posted by Nathan at 7:20 AM No comments: 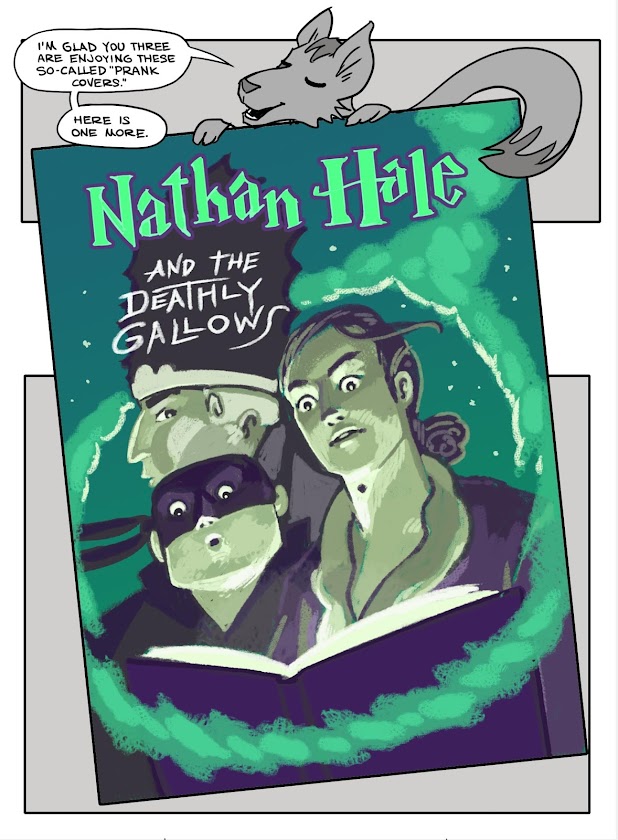 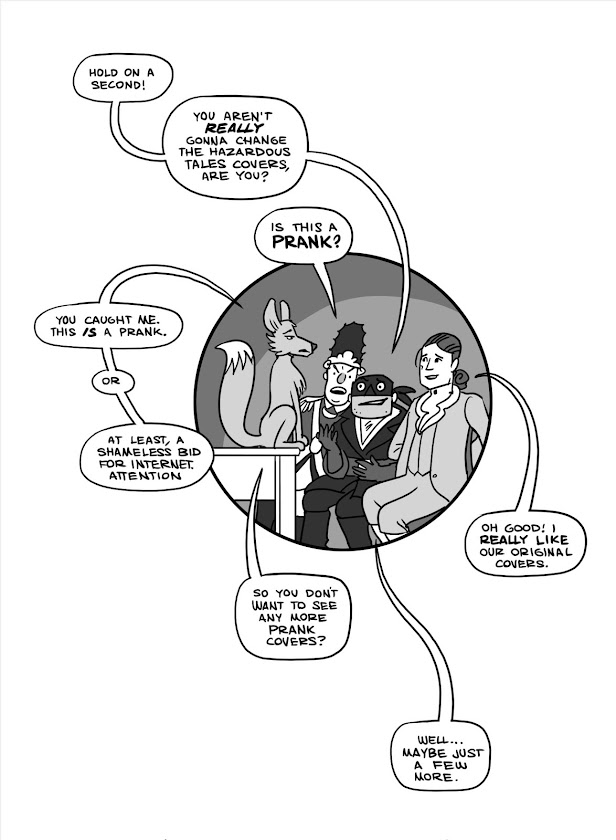 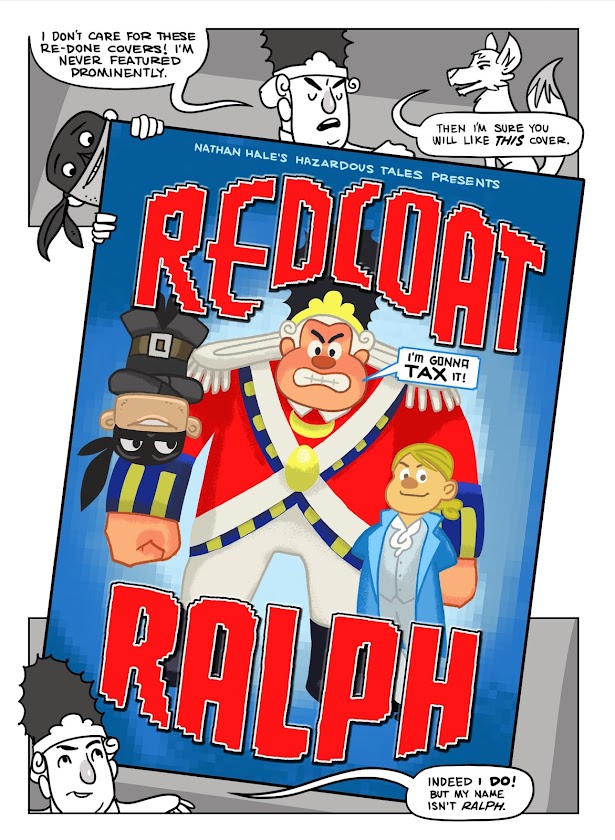 I'm ridiculously pleased with this one. There was some back and forth about "I'm gonna TAX it!" or "I'm gonna COLONIZE it!" I think tax is punchier.

Any favorites so far?

Back Monday for more!
Posted by Nathan at 1:00 AM 3 comments:

Hey, I ran out of time to do today's silly cover mashup! Why? Because I was doing the final cover artwork for the next Hazardous Tales book (the REAL cover!) The subject matter is still secret, but here's a puzzled up version, can you make anything out? 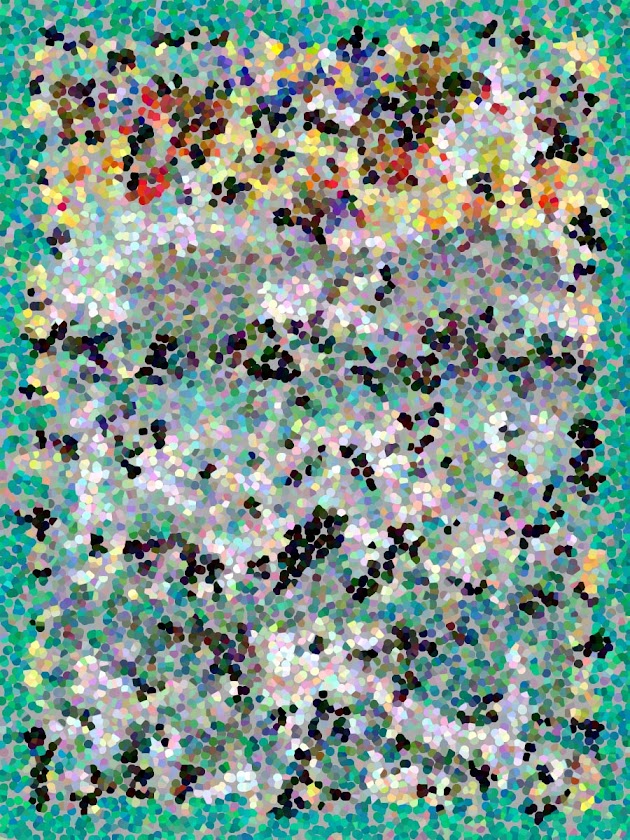 Any guesses? It helps if you stand back. I think there are some actual recognizable shapes in there. Back tomorrow with the next mashup cover at the Hazardous Sales meeting.
Posted by Nathan at 7:02 AM 7 comments:

I'm not a fan-art guy, it's just not something I do. I did it when I was a kid, but it's been a LONG time since I've drawn anything resembling fan-art. But after this week, I can see the draw (no pun intended.)

I was nervous that if I didn't draw Finn's iconic white hat-thing on Hale it wouldn't look right. But I think it turned out okay. 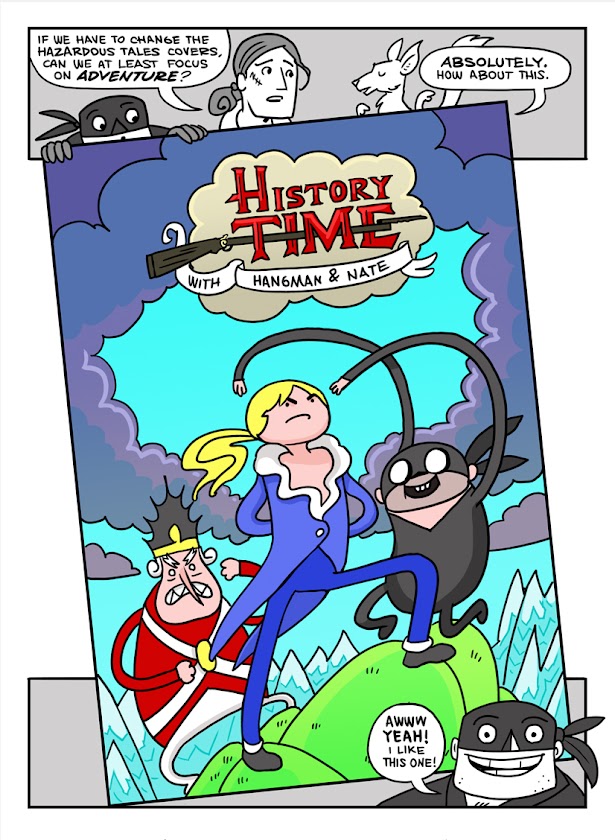 Posted by Nathan at 6:23 AM No comments: 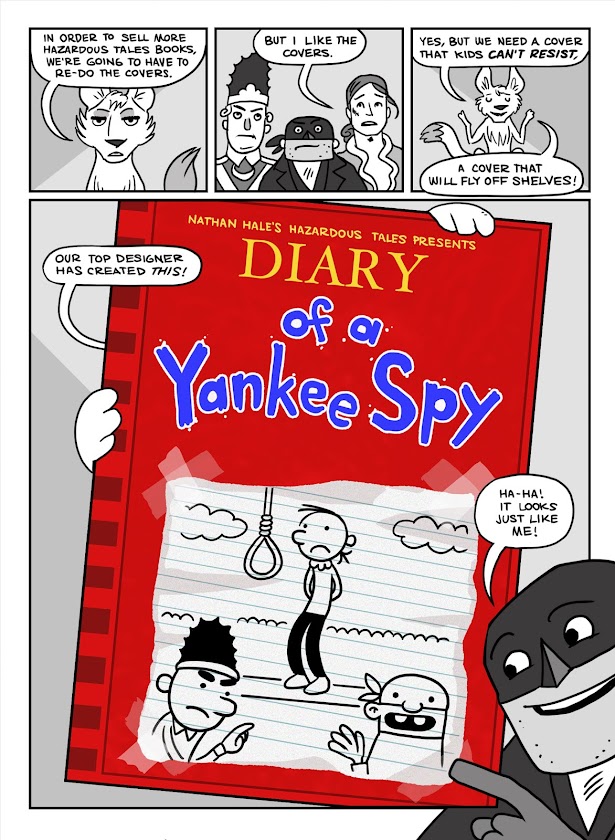 My children were absolutely TRANSFIXED by this spoof cover while I was drawing it. They just couldn't believe I could draw the Wimpy gang.

Be honest, you know you'd buy it.

By happy coincidence, Wimpy Kid #7 launches TODAY! Grab a copy--and while you're at it, throw some Hazardous Tales in your cart!
Posted by Nathan at 4:29 AM 2 comments:

This week we're going ALL Hazardous Tales, hold on to your hat! 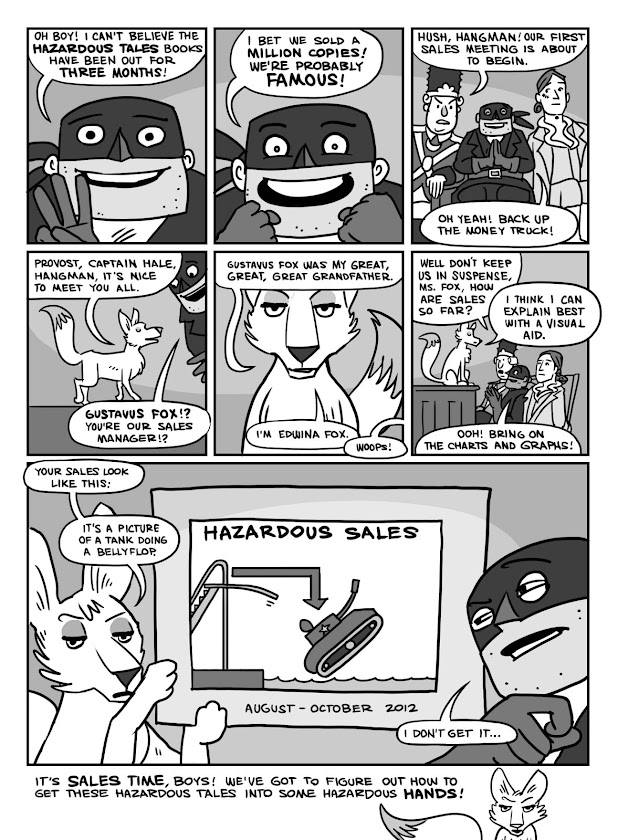 That's right, sales of Hazardous Tales are like a tank doing a bellyflop--okay they aren't THAT bad, but they are for the sake of this story. I'm new to this non-fiction comics game. It's a slower game than I am used to.

Tune in tomorrow to see what Ms. Fox has planned to boost sales!

I know a good plan--it involves you, the blog reader, buying some copies of the Hazardous Tales. That's an awesome plan.
Posted by Nathan at 6:56 AM No comments: 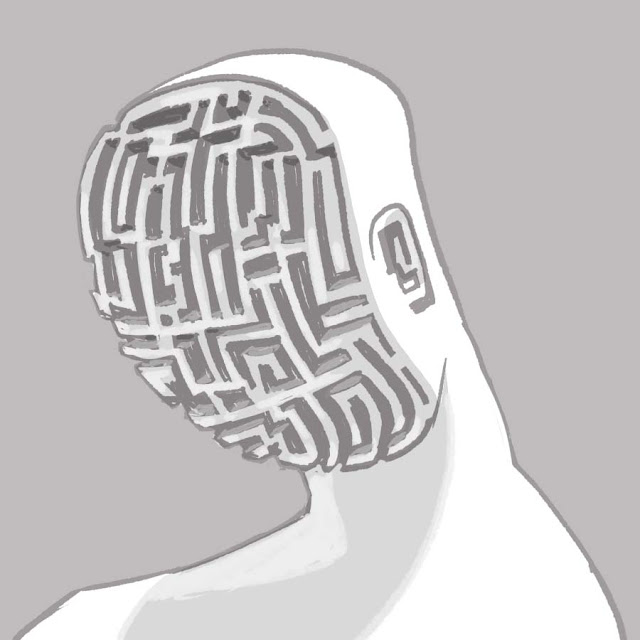 Here's something fun. My inner 14-year-old is wildly proud of this. I'm enjoying this light grey.
Posted by Nathan at 6:46 AM 3 comments:

Ghost at a Beach 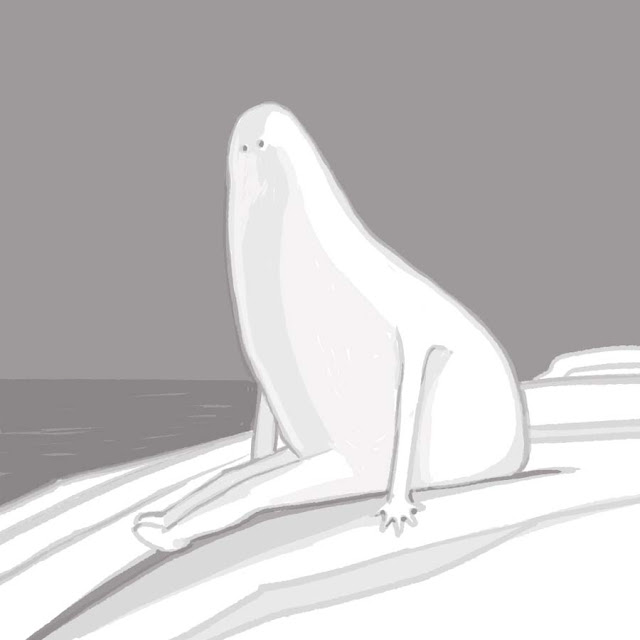 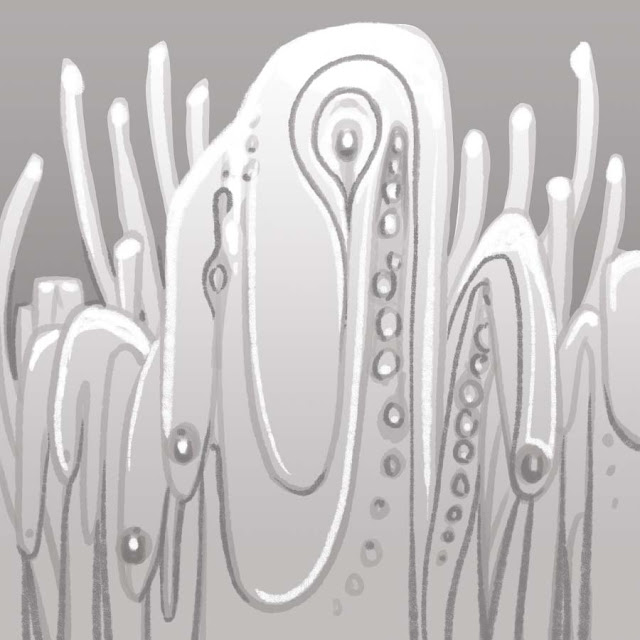 A Sneak Peek at Hazardous Tales #3

Believe it or not, this is a full page from the Next Hazardous Tales book. Page 35, to be exact. What on earth could have upset our Hangman so much? What stretch of American History will be covered in this one? All will be revealed...in time.

You can see, however, the color for the next book: green. 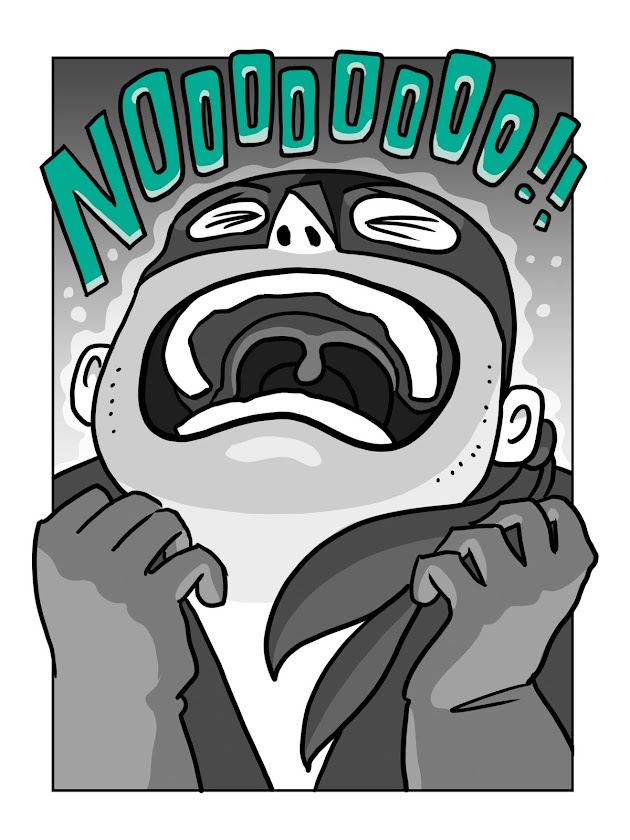 A note for the Taco demanders from Friday's post:

I know you all want to see the rest of the Taco Hell story. Don't worry, I will finish that story, but not now. This month's blog posts have to be on the simple side. I get to do the big, paneled, complex stories when my work load is smaller. The longer you wait, the more spectacular and well-drawn the Taco finale will be. Hang in there!
Posted by Nathan at 4:56 AM No comments:

Many years ago I wrote a picture book manuscript about a little character named Rutherford Bat. It wasn't very good. It was something about him getting into a flying race with some pterosaurs. Actually, that sounds pretty awesome now that I think about it. I don't know where that story is--it was long ago enough that it might be handwritten in a notebook.

Anyway, while I forgot the story, I never forgot the name of the cute little guy. Here's a sketch of him. 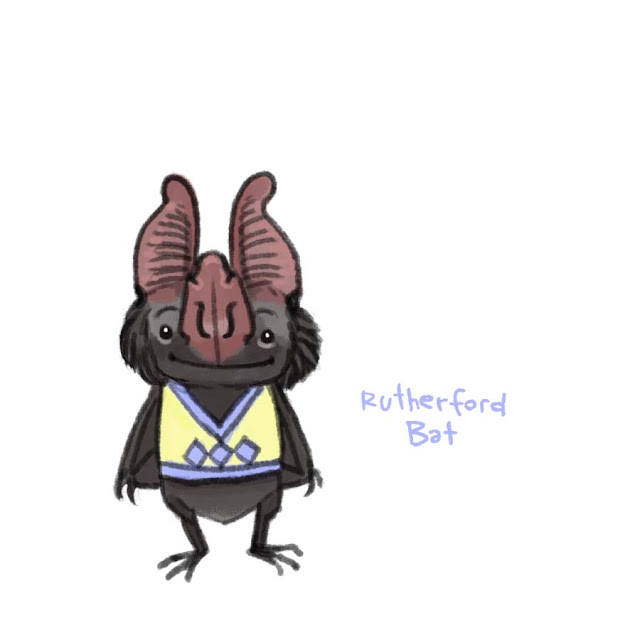 Aww. Isn't he adorable? Look at that little face! Look at it! I've got to dig up that story...

So, it's November. We are finished with the Horrorscopes and Frankenstein material. And, to tell you the truth, I have NO IDEA what to post this month. It has to be EASY. Hazardous Tales #3 final art is due at the end of the month, and I am so behind. I'm doing the "Reverse Circadian" sleep cycle to get it done.

I do have some Hazardous Tales stuff I want to talk about soon. But other than that, it's really going to be a grab bag this month.
Posted by Nathan at 6:45 AM 6 comments: