Hey everyone, Thanks for your patience through what will be known as the BIBLE months--strike that--the BIBLICAL TIMES. I'm up to the book of Luke now. 85 stories down, 40 to go. I can see the light at the end of the biblical tunnel. This has been an epic--EPIC job. No joke, it's like Rapunzel's Revenge and Calamity Jack combined, only Rapunzel and Jack are bearded men with robes and headscarves.

What news is there? Let's see, ONE DEAD SPY, the first of book in my Nathan Hale's Hazardous Tales series has been picked as a Junior Library Guild Selection. My only previous book to get that was Calamity Jack. I'm supposed to get printed, final versions of the Hazardous Tales books this week. I'll shoot some photos when they get here. My manuscript for book #3 in that series is finished and being reviewed right now. The manuscript for book #4 is due at the end of this week...I should probably go write that soon...

While I was away from the blog--during BIBLICAL TIMES--blogger has gone and revamped itself. There are many new features that I have never used before. If I'm using it right, my most popular post ever is the photo of my LEGO Lewis and Clark boat. huh, wouldn't have guessed it.

Anyway, the Space Station should be somewhat operational tomorrow. Although, if I'm honest, I'd love to shut it down until July, when the BIBLICAL TIMES are finished. The problem is that TACO HELL DRIVE-THRU is a complicated story to draw. I just need to finish it, then launch something easy to draw. Or post some old sketchbook stuff. Or something.

Tune in tomorrow to find out!
Posted by Nathan at 11:39 AM 2 comments:

You've been hearing about my historical graphic novel series for over a year now, well, now you can finally SEE what they are going to be about. Take a look at pages 10-11 (right after the Wimpy Kid spread!) Coming this summer!

Walker Books is doing a special paperback edition of THE TWELVE BOTS OF CHRISTMAS this year. I just finished making this little guy for the "This Book Belongs To..." page.
Not quite the season, but here's a little bot for you. 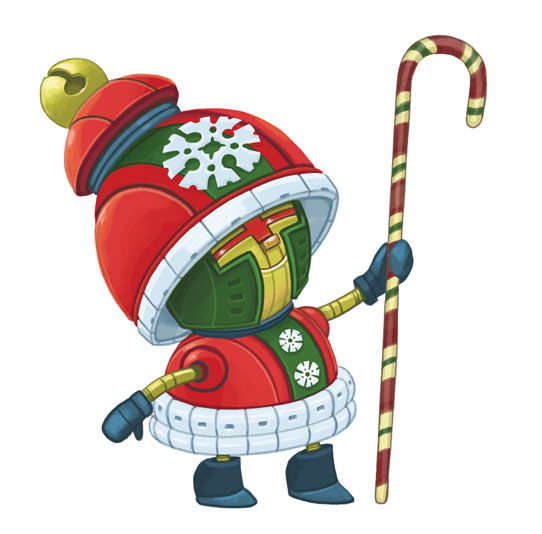 Hoo. What a mess. You know that feeling when you've gone waaaaay too long without cleaning a room? That's how I feel about my poor blog. It has been severely neglected. Like in Animal Crossing when you haven't visited your town in months, and there are weeds everywhere. Never mind.
In any case. I need to set a date to get things back on track, instead of just letting the last few posts just float here in limbo.
The date: May 1st
I will return to the rock-solid five-day-a-week posting schedule I've held to for the past few years. It will be rad.
Posted by Nathan at 8:30 PM 2 comments: