As you know, CALAMITY JACK (sequel to the Eisner-Nominated RAPUNZEL REVENGE, in case you forgot) is coming out January 5th. Now, I've been cranky about this release date for some time now. I thought it was a terrible time to release a book, two weeks after Christmas. But I was wrong.
Earlier this week I was hanging out with a bunch of writers (at that "Authorpalooza" thing I mentioned Tuesday.) I was told, by MAZE RUNNER author James Dashner, that two weeks after Christmas is a FANTASTIC time to release a book. (James has one coming out the same time) Can you guess why?
Gift cards.
Everybody gets gift cards at Christmas, and a very high number of them are for bookstores. So, once again, I've discovered I know very little about the ways of publishing.
So remember, if you get a bookstore gift card this Christmas, it's like getting a copy of CALAMITY JACK. Also, if you read this post, you are now required by law to buy a copy. You can't use your gift cards for anything else. Robo-Santa is watching. Even after Christmas--especially the two weeks after Christmas.
{UPDATE: I've been given a stern reprimand in the comments section, it was Jessica Day George, author of PRINCESS OF THE MIDNIGHT BALL, and the DRAGON SLIPPERS/FLIGHT/(upcoming) SPEAR series, who gave me this information, as well as James. Sorry Jessica, you are right, you told me about the gift card/week after Xmas thing. Now that I think about it, James may have just stood by and nodded. I just didn't want to get TOO carried away with the name dropping. I know Jessica Day George and James Dashner--how 'bout that?}
Posted by Nathan at 3:53 PM 6 comments:

I hate to break up the smooth, uninterrupted line of Robo-Christmas posts, but I'm doing an author signing at the West Jordan Barnes and Noble tonight (Tuesday) from 5-7. It's an AUTHORPALOOZA, so many Utah authors will be there. I'd list them, but I can't remember who's coming. You'll have to come to find out.
Posted by Nathan at 10:01 AM 2 comments:

The Twelve Days of ROBO-CHRISTMAS begins! 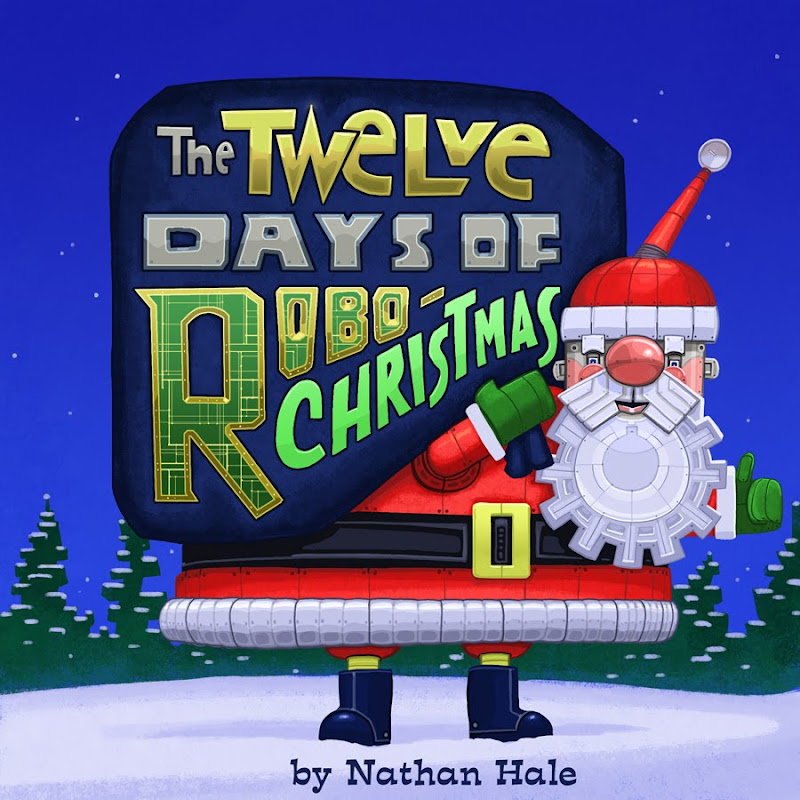 Okay everybody, I promised a big, special, Christmas story and this is it! The Twelve Days of Robo-Christmas officially starts tomorrow. This is the cover, featuring Robo-Santa.
Who do you think would win in a fight between Robo-Santa and the Santasaurus from The Dinosaurs' Night before Christmas? I don't know, but I'd love to watch.
So, sit back, pour yourself a glass of Robo-Nog (that's one part egg nog, two parts motor oil) and get ready for Robo-Christmas...istmas...istmas...istmas..(that's echo.)
FEBRUARY UPDATE! The Twelve Days of Robo-Christmas was contracted for publication! So the 12 original posts from this story have been taken down, they will be viewable soon in book form!
Posted by Nathan at 12:32 AM 11 comments: 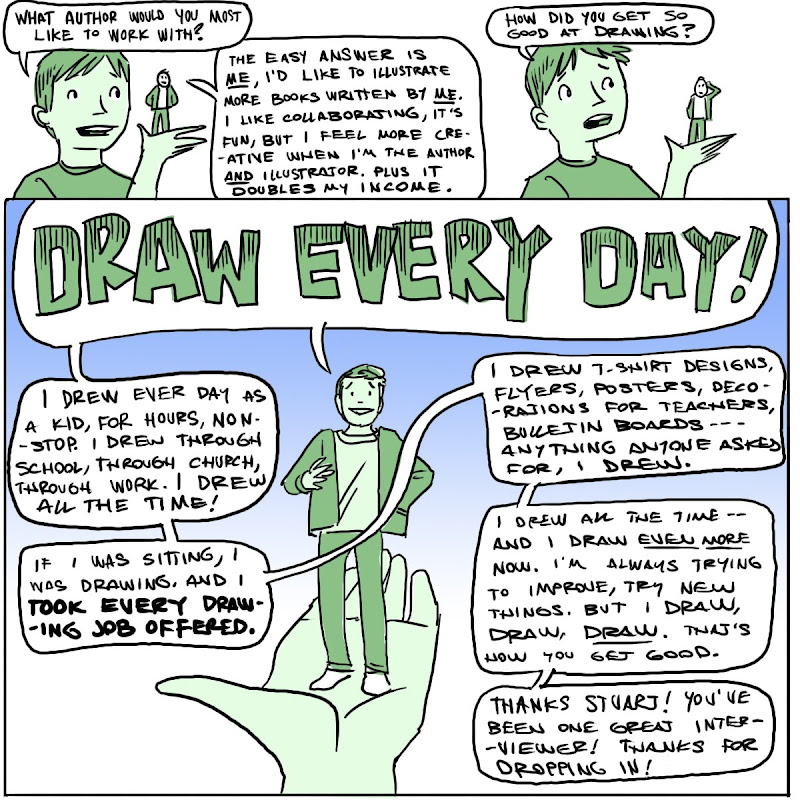 I hope you've all enjoyed the big interview. Great questions from a gigantic 9-year-old.
IMPORTANT ANNOUNCEMENT: Be sure to check in tomorrow and Sunday, my official Christmas themed blog story starts tomorrow, it's so BIG it flows over into the weekend! So be sure to check back every day until Christmas (all twelve--hint hint!)
Posted by Nathan at 12:00 AM No comments: 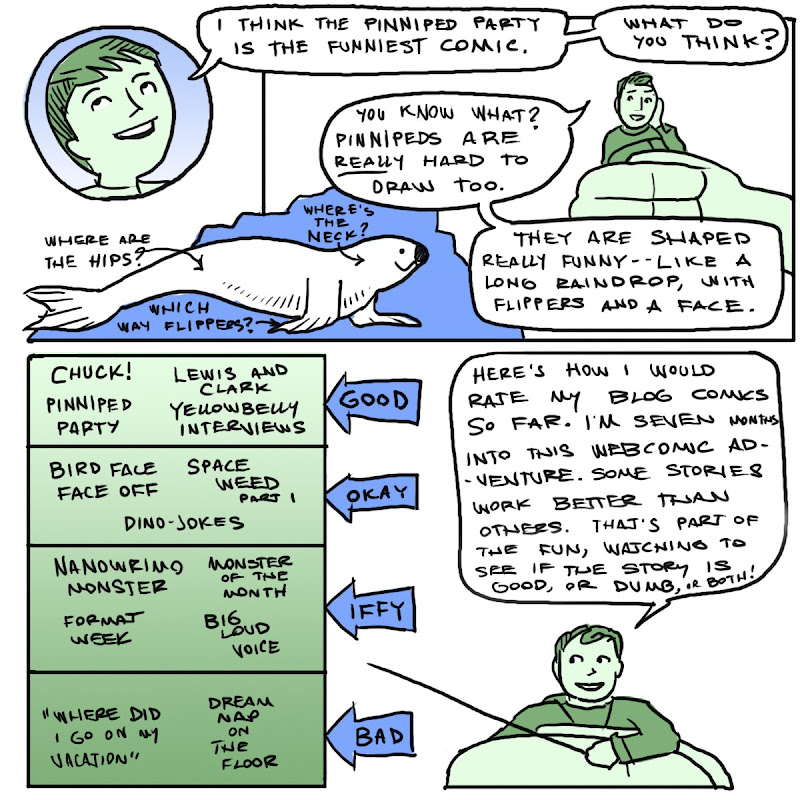 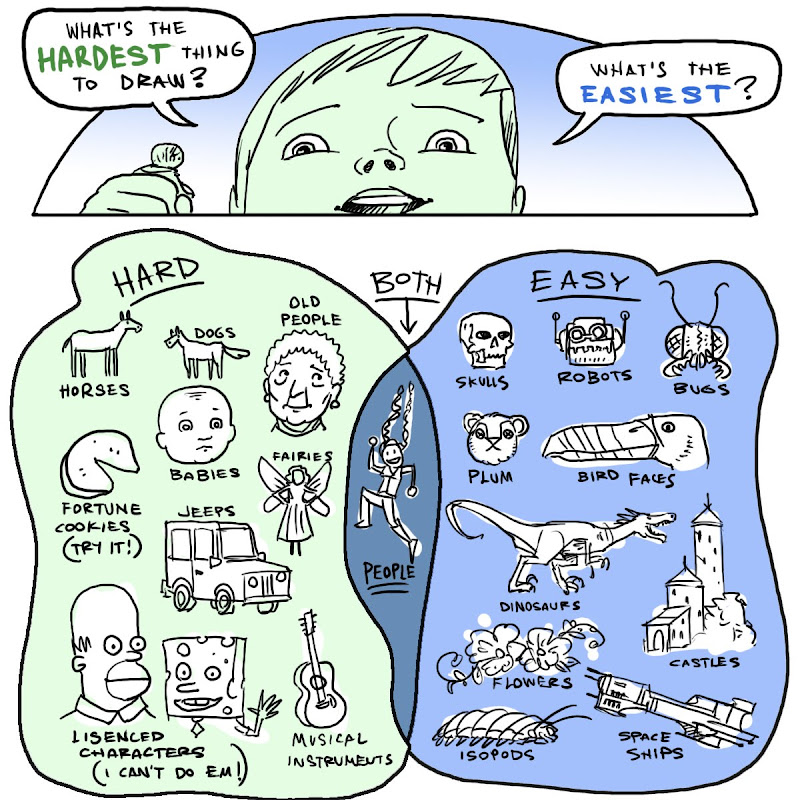 I'm not kidding about the fortune cookie--that's a complex shape. Try drawing one without having one to look at. Also, I've never been able to get licensed characters right, they always look off. I was once up for a job illustrating OLIVIA spin-off books. I tried and tried to match that pig--she always ended up looking like a flip-top garbage can. Needless to say, I didn't get that job.
Posted by Nathan at 12:00 AM 7 comments: 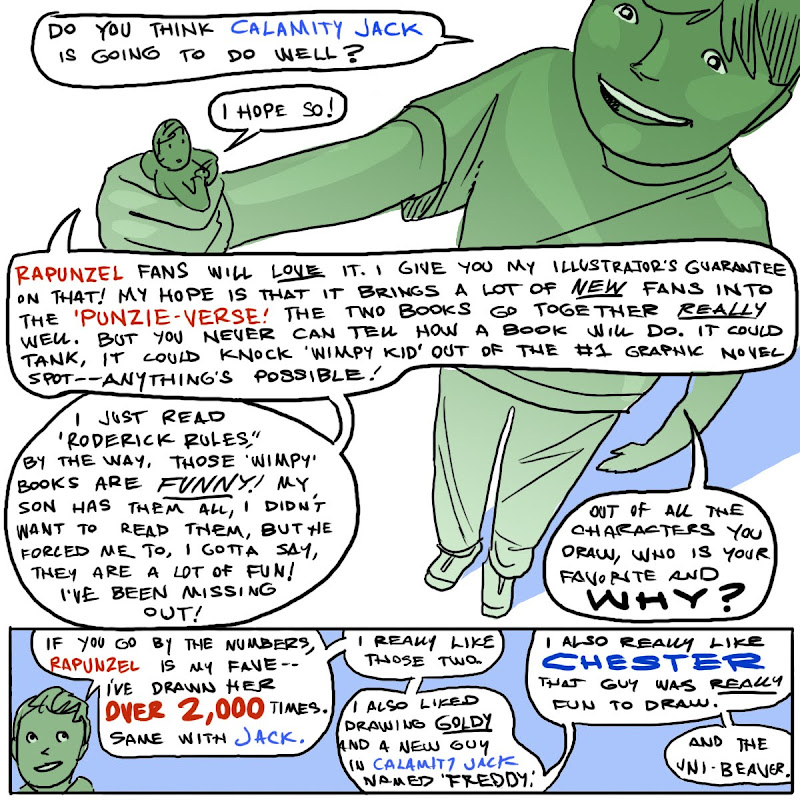 Speaking of Calamity Jack, I've put a PRE-ORDER link in my book section. Click on it, it'll pop you over to Amazon.
And hey, I just noticed, it's my birthday today! I'm 33!
Posted by Nathan at 12:38 AM 9 comments: 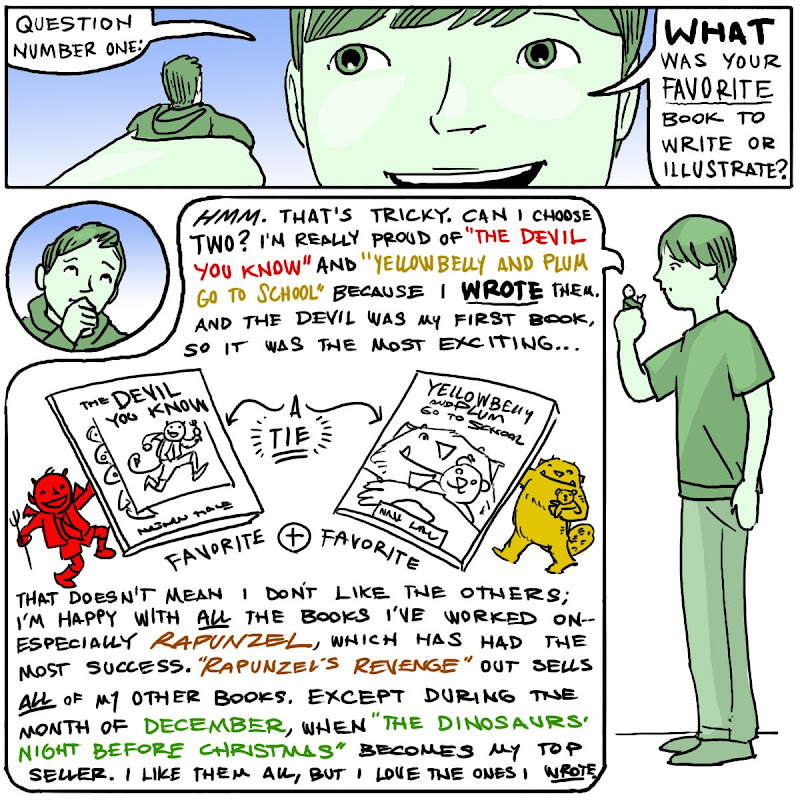 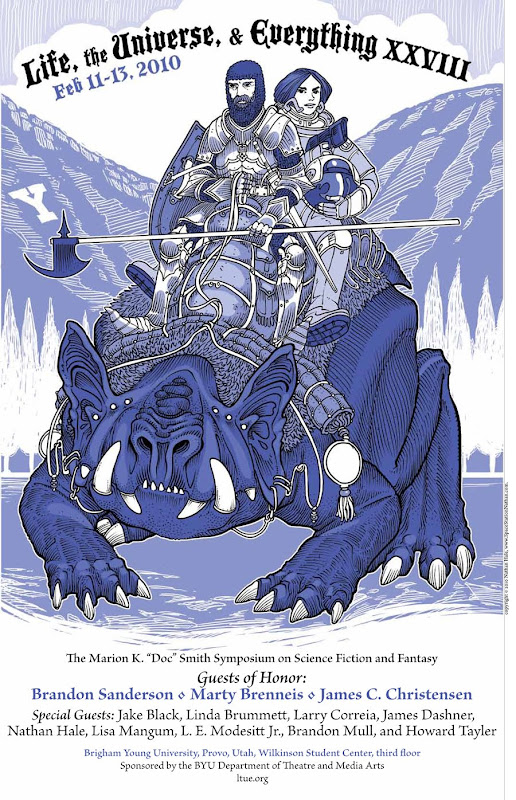 I never post about the jobs I'm working on. I've heard too many horror stories about illustrators getting in trouble for posting publicly about projects they are doing for clients.
I'll blog about a big book project (picture book/graphic novel) from time to time, but never my regular, bill-paying, freelance jobs. It's the text books, book covers, and interior spot illustrations that keep me in food and LEGO bricks--not the picture books, believe or not. Anyone who thinks picture books are easy money makers is so-o-o-o-orly mistaken.
Sorry, got off on a little tangent there.
Anyway, this poster is for an upcoming sci-fi and fantasy symposium, "Life, the Universe, and Everything" at a nearby university. I did it for fun (free!) so I feel I can post it here for you to enjoy.
The guy in front is based loosely on my video game character from Demon's Souls, he's got the Halberd, Heater Shield and Gloom Armor (minus the spiky "hand" shoulder pads.) Nerd. I never liked the Halberd, I'm all about the Blueblood Sword now. (I realize this is total nonsense, but I can't seem to stop typing...)
Posted by Nathan at 2:06 PM 6 comments: 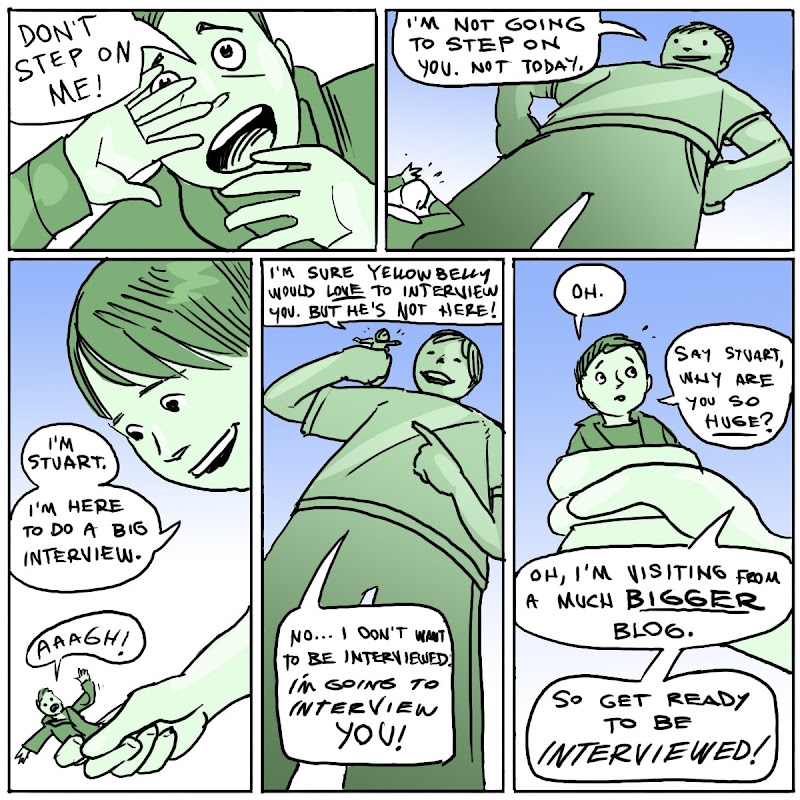 That's right, I'm the person getting interviewed! I told you it would be an awesome guest.
This is Stuart, he's nine. He's visiting from a friend of mine's super blog; Sophistimom. The Sophistimom herself has given me some very nice reviews on the "Well Read" section of her blog--when she contacted me to do an interview, I thought I'd do it cartoon style.
Some of you may recognize Stuart from the comments section here at the Station. He's been patiently waiting for this segment for quite a while. It was planned well over a month ago, then I had to put it off for NaNoWhatZit (still haven't finished YIPE!) So he's been chomping at the bit to get rolling with his GIANT questions. Which is what we'll do--after the weekend!
Posted by Nathan at 1:12 AM 1 comment: 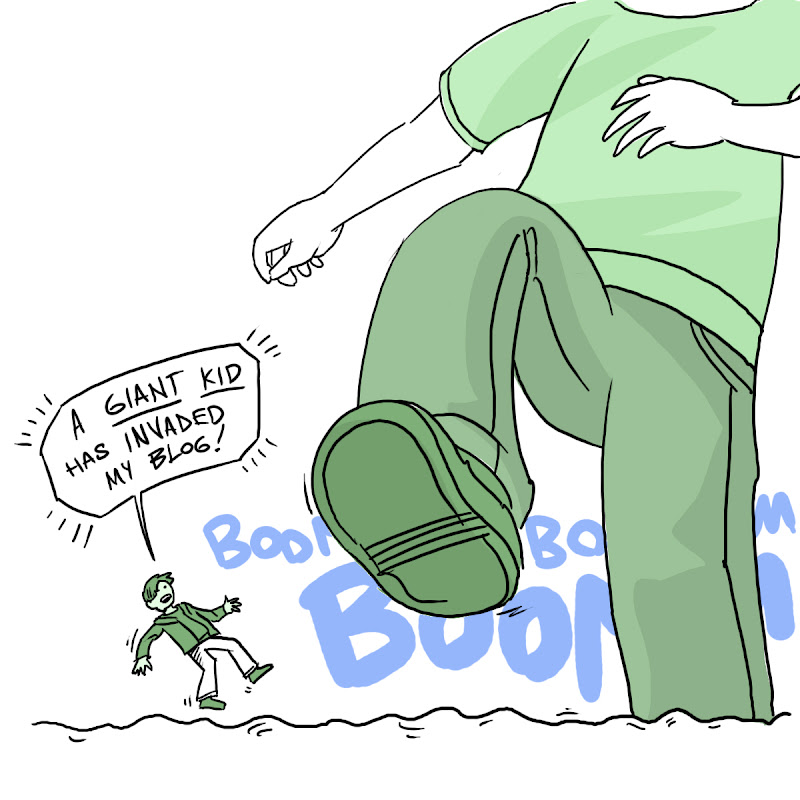 Although it may not look like it, this is actually the start of the promised interview. It's true! Who will it be? I promised someone awesome...
Yellowbelly can't run things. He's holidaying in Acapulco with the little devil. So the interview duties will fall to somebody new.
Posted by Nathan at 1:28 AM 4 comments: 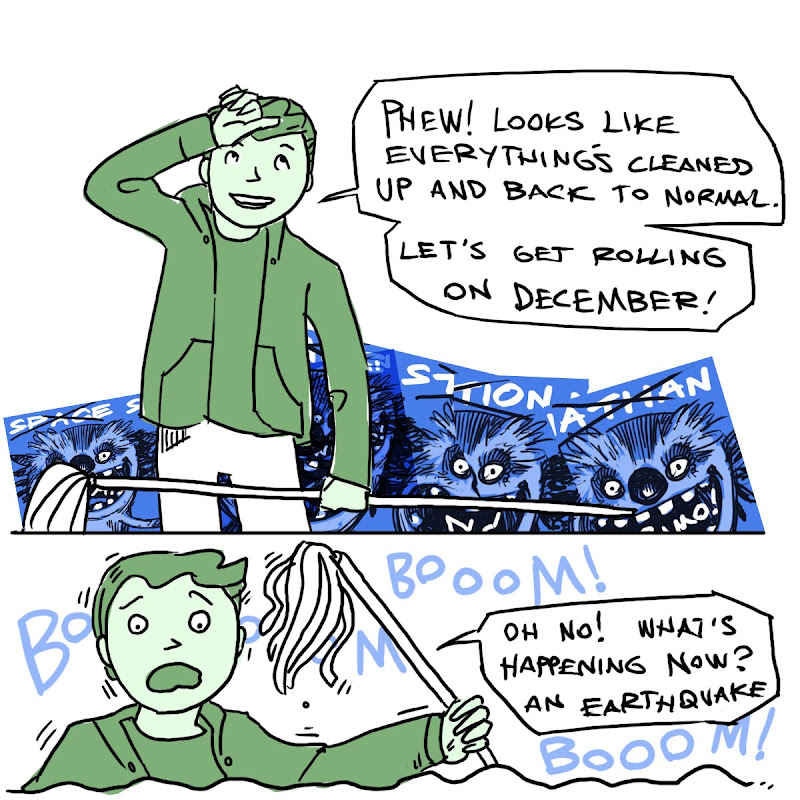 NaNoWriMo is finished! ...wish my novel was. 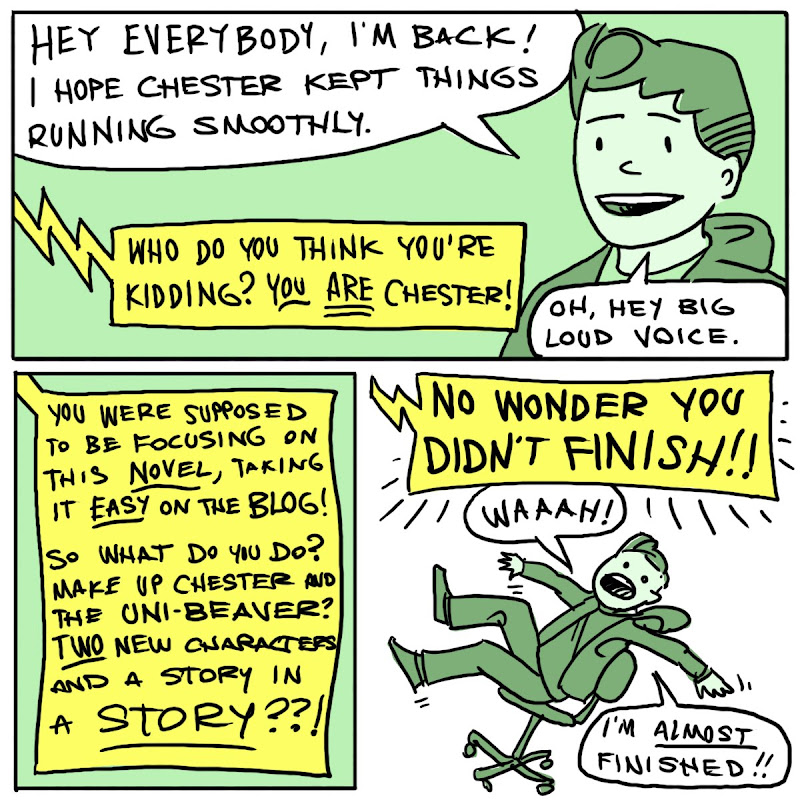 Okay! NaNoWriMo is over, and my story will be too, but not in time to keep it all in the month of November. I'm close though, really close. Only 2,500 words or so from finishing my rough draft. I'll probably finish wednesday or thursday. I could do it tonight, if I stayed up for four more hours. But I don't want to force the climactic finale.
It was a GREAT experience. I loved it. I'm looking forward to doing it again. And I'm REALLY looking forward to cleaning up this story I'm working on and sharpening it up for submission. I'll keep you all posted.
I hope you enjoyed the Chester show, I thought it was pretty funny stuff. I laugh every time I draw that Uni-Beaver. I Love the Uni-Beaver! Chester's been a very enjoyable character to draw and write. Watch out, he's going to end up in his own book series, just you wait. In fact, I'm going to let this NaNo Story rough draft soak for a few months (as you're supposed to, National Editing Month is in March) and dive into some Chester the Magical Centaur story material.
As for the blog, I don't exactly know what's next. I've got the SPACE WEED, and another interview planned, but it's suddenly December...I feel as though I should be moving into the Christmas material.
One thing's for sure, I gotta clean up the banner...and my bio photo...
Posted by Nathan at 12:23 AM 4 comments: