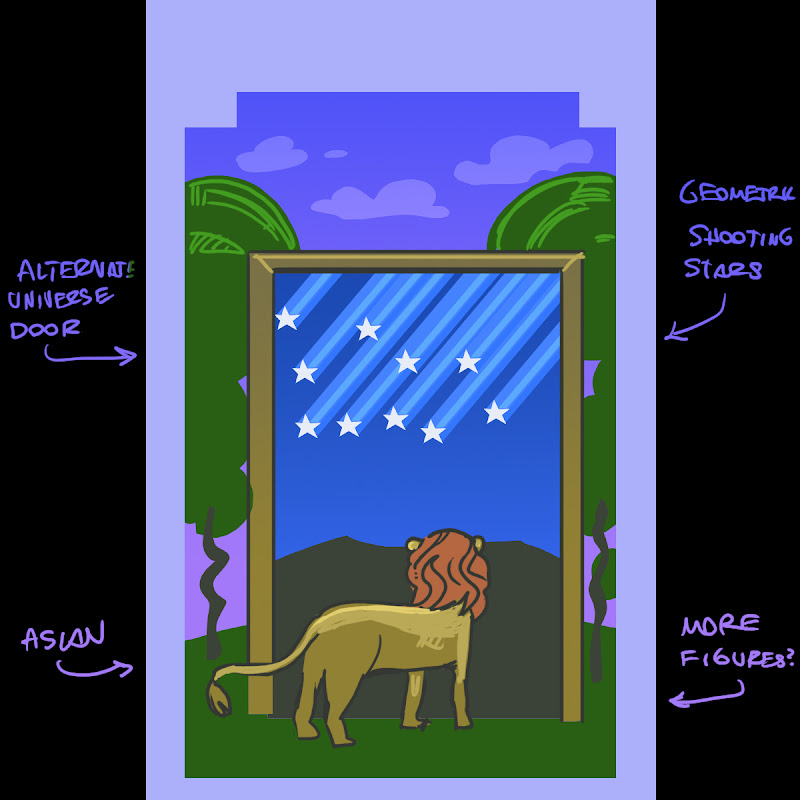 Book #7: The Last Battle
The most memorable part on this cover was the shower of geometric stars. There was a big gateway to another world, and Aslan was staring into it. I'm feeling pretty good about this one.
What I remember from the story: This is the book I've read most recently. I read it as a teenager, around fourteen. I was stage managing a play (can't remember what play) and a copy was in the booth, so I read it during the play.
A better title for this book would be "The Monkey, The Donkey, and the Long-Winded Allegory." This book was wacky. This is the one where the allegory got so heavy handed it started to outweigh the story. So, let's see, there was a nefarious monkey who finds a lion skin at the base of a waterfall. He takes the skin and dresses up a donkey with it. So the donkey looks like a lion. He then takes the donkey-lion around claiming it is Aslan. The Narnians must be spectacularly dumb to mistake the donkey-lion for a real lion. Anyway, they put up a tent and the donkey-lion hides inside of it and the monkey keeps everyone out.
I gather this is all C.S. Lewis's allegorical take on modern Christianity. At this point in the book, I found myself thinking, "Yeah, but where's the BATTLE? I was promised a BATTLE? Tolkien threw down with some epic battles, so BRING it Lewis!"
He never quite brings the battle. There is some scuffling, and Aslan (the real one) appears in the tent. And if anyone goes into the tent they get zapped dead. (This is a little hazy.) The monkey goes in and gets zapped. Then all the English kids, young and old appear in Narnia, I'm guessing the stars rain down, then everyone in the universe dies and runs to Aslan's Country.
I'm sure I'm forgetting things. But that's my take on The Last Battle and the last book! Tomorrow I will post the REAL covers, and we'll see how bad my memory is.
Posted by Nathan at 12:00 AM

I love your title.

That's about what I remember from this book, too. It was weird.

I haven't read this since I was in 3rd grade, but what I remember is "Further down and further in" as they are going deeper into Aslan's country. I loved it--but as a child I wasn't skeptical about preachiness.

I think you'll be pleased with how good your memory actually was. Of course there will be a couple of "how did I forget that? or Why did I flop that moments, but I am impressed with how close some of these really are. Of course I have been cheating all along and comparing what you did, so it's easy to play judge from this side. It's been fun to follow this series.