The Narnia Covers, book 3: The Voyage of the Dawn Treader 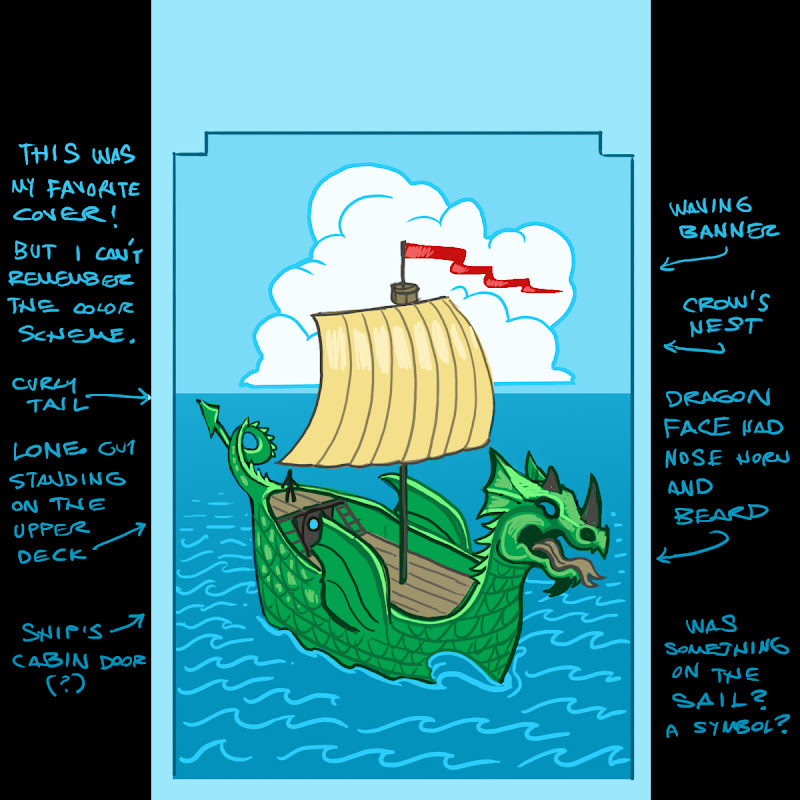 Cover #3: The Voyage of the Dawn Treader
This one. This cover, man.
I must have pored over this cover for hours. It was so cool! But I can't quite remember the color scheme. I think the boat was supposed to be brown, yeah, kind of a golden brown--now it's coming back (too late.)
What I remember from the story:
Because this was my favorite cover, it was also my favorite book. I can't remember WHY they were sailing around, or WHAT they were looking for. They were just sailing along, stopping at weird islands. I remember the pool that turned things into gold, the island of the Dufflepods (well, I remember the Dufflepods--I don't remember what they did with them.)
The scene I remember the clearest is the scene where Eustace puts the bracelet up high on his arm, then turns into a dragon and the bracelet squeezes his arm. I could really feel that arm pain. Then I remember the followup scene, where Aslan claws off the dragon meat. (They totally wimped out in the movie; Aslan does a spell and the scales just sort of twinkle off. Not the dragon vs. lion gore-fest I wanted. RAWR! RIP! SLASH! RIP!)
I remember an island where there was a star man. And I remember the weird final island which was like a scary tunnel(?)
Seeing the movie so recently has messed up my memory. I'm glad we are now leaving the movie-ized books (almost--I have seen the BBC Silver Chair, but it's been a long time.)
I watched the E3 Nintendo press conference--what a crazy controller-screen-thing. Should be interesting to see how it turns out. I love seeing the three big console companies try to outsmart each other. Not a lot of interesting games shown this year, seemed to be nothing but shooters and motion control games (and motion control-shooter games.)
Posted by Nathan at 12:00 AM

Stopped at my mom's and found my boxed set, but I'm missing LWatW and The Silver Chair. Not sure if I've got them on my bookshelves somewhere or if they just were read to pieces.

This one was my second favorite of the books. It's so exciting! And I was not pleased by the movie version.

All of my copies disintegrated. Thinking back, they were pretty flimsy little paperbacks.

It’s interesting that you flipped the orientation again. (Sorry I peeked at the original already.) This is a fascinating experiment of image nostalgia.

Wierd Nate. I guess I'm your Google filter. Just so you know, you nailed the basic composition (forgot the sea monster though). And guess what? you flopped the image again! The boat on the other cover travels from right to left! You might start wondering if there is a mirror switch in your brain somewhere?

I guess I should have looked at the post before mine, then I wouldn't look like a doofus thinking I scooped the flopping aspect....

These are impressive! I think you may have been mixing up two of the covers in your mind, though, because the older one doesn't have the curly tail that a newer one does.

I already google'd Silver Chair so I'm ready for your next one. :)

This book was my husband's least fav as a kid because he thought it was boring. I never read them as a child, and this was one of my favorites, mostly because of that dragon scene. I loved the repentence/baptism aspect of it.

The funny thing is, looking back on this book, it DOESN'T seem very exciting. Just an open ended cruise through a fantasy ocean. But I loved it as a kid (mostly for that cover.)

When I read these as a kid (or had them read to me) I took them completely at face value. When I found out they were chock-a-block with Sunday School lessons, I felt a little tricked. I felt like C. S. Lewis had pulled a bait and switch. I didn't want a church parable--I wanted a cool story about dragons and talking animals. I still feel that way.