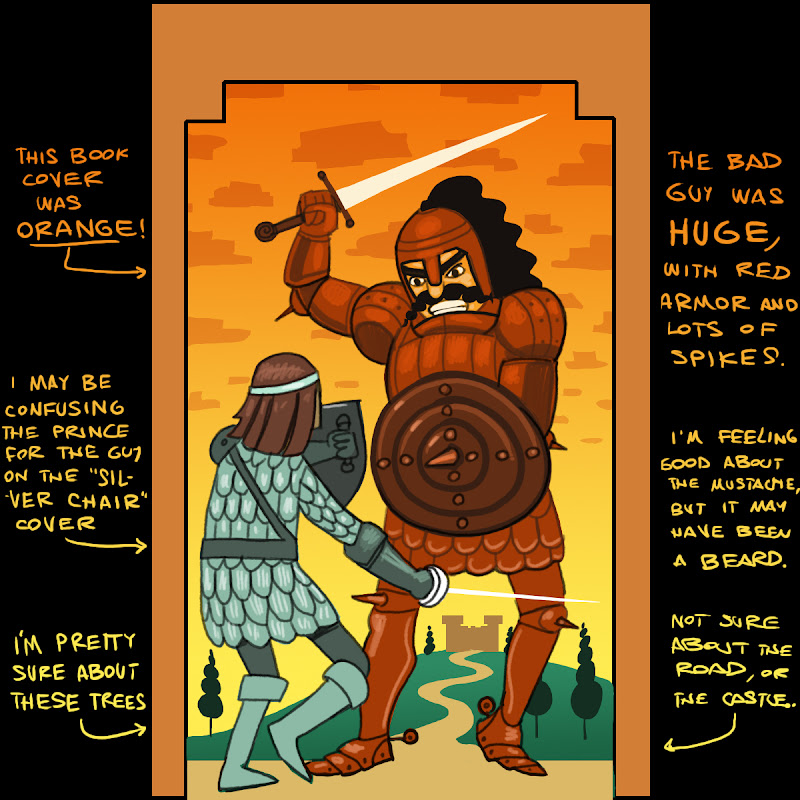 Cover #2: Prince Caspian
This was a cool cover--definitely in the top three. I remember it being very orange and aggressive. The one part I can't quite picture clearly is the Prince himself. I remember the big, hulking knight (Did he have a sword? I can also picture a big spiked club.) And, for sure, this cover had some very stylish trees in the background.
What I remember from the story:
Phew. This one is a little blank. I remember that the words, "Usurper" and "Tyrant" came up a lot. My first time through the series was as a listener, my Dad read them aloud to me (and my younger siblings) when I was a kid. I can clearly recall asking, "What is a Usurper/Tyrant?" every night. This book taught me those two words. That said, I can't remember who or what the usurper/tyrant did. I guess he usurped the kingdom. Prince Caspian's dad? Uncle? Can't remember him, or how they eventually beat him.
I have no memory of any English children being in this one, although I'm sure they were. There was a cool badger named Trufflehunter (I think this was the book he was in.)
I did see the recent movie, I think I saw it within the past twelve months too. I remember nothing. That movie is white noise in my brain. Was there a hunky centaur? I think I remember him, not much else. For some reason it blends into Disney's Prince of Persia (also white noise.) A lot of running around, some tents, lots of battle scenes where the two sides run at each other across a field.
I do have a different movie memory though, from the somewhat iffy, early 90's BBC series. There was a part where Prince Caspian was hanging out with some owls, and they were just actors in huge, people-sized owl costumes. Don't remember anything else, just that.
This memory stuff is fun! I can't wait to see the real covers. It sounds like a lot of you had this same set.
Posted by Nathan at 12:59 AM

Finally! You're up late doing this...

I think the BBC version got the tone of the books better, even if the set and effects looked like a church road show.

Huge owls? ... might keep them in mind for the Silver Chair.

Yeah, the owls were in The Silver Chair, in the books anyway. I couldn't say what might have been in movie versions. Your covers are great.

Uh-oh. Already mixing up memories, sounds like I've put the owls in the wrong book.

Just Googled the cover- you are remarkably close for going from memory. Even got the moustache right. Interestingly, the figures are flopped. Can't wait to see how close the next ones get!

REALLY? I reversed the image? That's so weird. I was POSITIVE this was the layout. huh. Dying to see the originals...

Weirder than the flopping is that you've got the sword and the shield in the right positions, but you've swapped the wielders!

I'm trying to think of other iconic covers you could do next. What about the first Tolkien paperbacks? (my friend Barbara Remington did those--and purely by the editor describing the story to her, because there wasn't time for her to read them before the books had to go to press!)