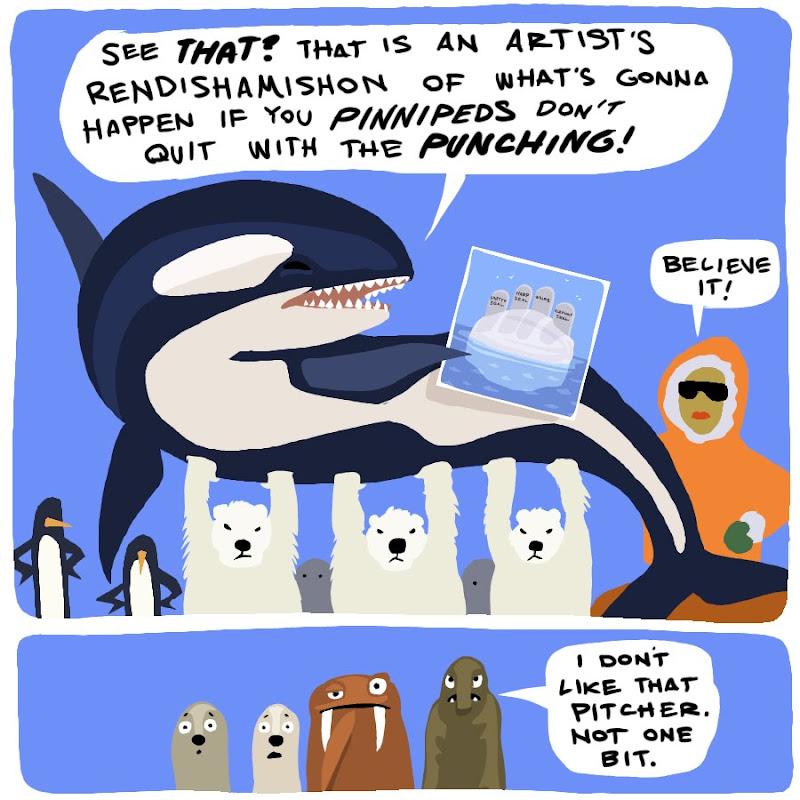 For some crazy reason, I can't type on today's post. It messes up the html, and comes out as "KKKKCCCKKKKEKEKK" --anyway, here's what I meant to type:

This format allows for the funnest cliff-hangers! I hope you all got a kick out of yesterday's post. It was actually an idea my little sister Leigh had. We had dinner on Sunday, and she made up the gravestone premise, we laughed so hard, I had to do it. Too funny!

I wanted to comment yesterday, but didn't want to spoil anything. Thanks for all your great comments.

Also, the reason the arctic scientist is so much larger than the polar bears is because she's in a boat...and it's late.

Oh phew. I was so worried about the pinnipeds!
I wonder where the orca got said artistic redishamishon. hmm....

That is funny!
Great ending!

I've never cared for pinnipeds so much in my entire life. I think I need to hire you to come paint a pinniped mural on my toy room wall.

A non-punching pinniped party just wouldn't be a party, no matter how many taquitos you had.

You really scared me there. My aunt and uncle are marine biologists, so this isn't entirely accurate, but I'm sure that if a pinniped went around asking for taquitos, my relations would assault them with sad diagrams.

Oh, hooray! I'm so glad you didn't just kill them all off.
But I would have understood. They were waaaay over the line.

Dang, I was pulling for the Polar Bears; it is becoming so difficult to for them to find a decent meal. A pinniped party could be just the smorgasbord they could benefit from.

Now they look like The Pips backing up Gladys Orca Knight.

PITCHER? PICTURE? That was deliberate, wasn't it.