It's time to see these outfits in action. Here are the favorite combos, but in an action pose! 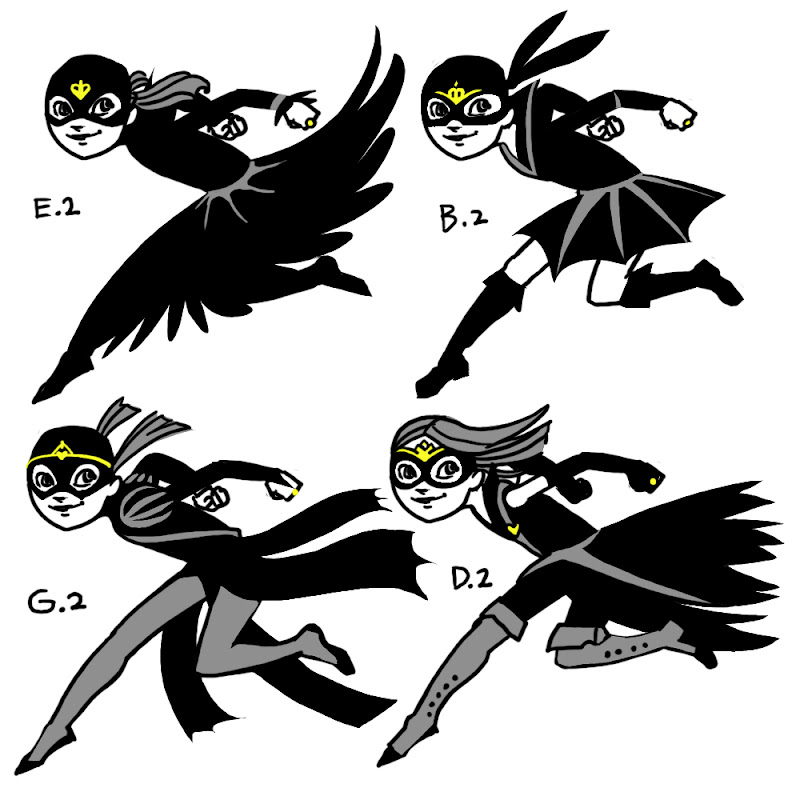 I know there were some cape fans out there, but I'm afraid I have to veto the cape. She has to have a dress, and a cape + dress is too much (think of the fabric costs!) I mean, a dress is a cape for your butt, right? --wait, that was good. Let me re-type that in bold caps:
"A dress is a cape for your butt."
--Nathan Hale
That's going on my short list of quotes for my headstone.
E.2 has the minimized crown-under-mask, and a little highlight at the waist.
G.2's dress is a very different in action. The long middle flap section is problematic. Although Chun Li from Street Fighter doesn't mind the long front flap. I like the gray leggings, they give her a dancer vibe.
B.2 has some die-hard supporters. It's got a little Sailor Moon action going on. For this version, I've cut the hair and put in the pirate tie.
D.2 has the suggested super-hero mask with a crown built-in. Does Wonder Woman have that? Reminds me a little of Wonder Woman.
Lets hear your favorites! The elements in these four are the semi-finalists, we'll cut these down to two, then the final costume will be chosen!
Have a good weekend!
By the way, would somebody PLEASE leave a comment on my Wednesday post. Do you hear that whistling sound? That's the wind blowing through the zero in the "0 comments" on that post. Based on comments, Princess BATMAN is 33 times more popular than American History. Please, show some love. For bonus points, can anyone guess the historical event that is happening on that sample page?
Posted by Nathan at 12:00 AM

I'm digging D.2 a lot. If you combine the puff sleeves on to it, it would be perfect.

Yeah. D.2 with the puff sleeves.

Butt cape, you just made getting dressed for church an adventure. Blahhahaha.
I like G.2 the best.

I like that B.2 has a bat-like skirt, because she is Princess Batman after all, but my favorite would have to be D.2. I like the whole outfit, especially the boots and the shoulder strap. I agree that I'd like to see it with puff sleeves. She also has sort of Punzie-from-Calamity-Jack-esque look to her.

I think the puffy sleeves are a higher priority that the button boots, but that's me. And a nice curly sort of crown.

And that's Washington's men crossing the Delaware river before attacking the Hessian camp at Trenton on Christmas Eve/Day.

I also agree with Krystal. D.2 with puff sleeves would be the best.

B2 is great with the cool skirt, but I love the boots on D2.

That quote is now on my shortlist of tatoos I would get if I were forced to get a tatoo. It's that awesome.


this one is my favorite. :P

Oh my goodness! Anika S. is drawing her own Princess BATMANS! ^

I have to agree with Krystal and others, D.2 with the puff sleeves and blonde hair would be perfect!

They look so great in action! I still really love B2, but D2 in action looks a lot better than D1 did when she was just facing forward.

I love both pairs of boots, though I think I prefer the length of them in B2. But I miss the pigtails! Brown pigtails, that is, like those in E2. Some hair has to be showing, I think. I like what you did with both crowns. What about a collar based more on the bat wing shapes than the triangle in B2? (similar to that great skirt, but in smaller detail so it's not too distracting from her face)

B2 with D2 hair. Definitely.