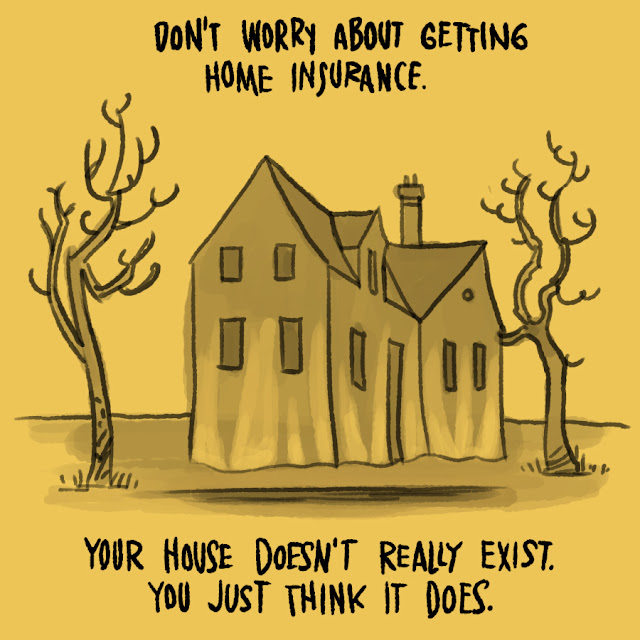 Heh, literally laughed out loud at this one :D

That's not the punchline I was expecting. Very fun.
My favorite horrorscope so far is definitely the first one with the stranger coming to my door. Great idea, and great picture--loved the arms.

Yes, it's going to be tough to beat the stranger at the door. We really kicked this off with a bang. But we'll keep trying. Rick has written a mountain of these HORRORSCOPES. We'll have a nice big stack to look through by the end of the month.

If you grant your house to the stranger assumingly that paradox might exist only in theory, then there is no problem at all in reality: his home does exist only nearby his beloved, you can make him feel as comfortable as possible in his newcoming encouraging him moving in new lovers and he promises not to have two arms lost.
Note: Don't sell it this might well deter him from being newly homed with you and impose restrictions on sale, while who knows he too might be very talented and smart so he can be of great use to unexpected though. But he also admits the stranger can't stay at the entrance for long waiting for you to let him in since he has to leave soon for another dreamland if not welcomed anymore. After having taken out insurance cover for future career life he wants to know what it feels like with honey together, and where they both would settle down as a couple after got married. He really is enthuastic looking forward joining his new family in NM/ALQ. He verily loves to be accompanied by loved ones and friends. So don't let him freeze keep him warm.

Speaking of the stranger who came to stay...

I know this stranger very well because the person whom I am talking about above is none other than him. The other person called Deveci whom I am talking about is very happy in his relationship (could not have been better for him to be associated with wavelength of the same value -- spiritually and emotionally) yet he feels that he is in places more than once in sequential moving. How I got this strange assignment, I don't know? It has got nothing to do with anything physical, though I do not promise;) but all intangible it triggers down the memory lane to recall those strange moments once reserved to private settings... so weird but also cool, isn't it?

Stranger's last months in study in where he is loving to live right now, and he hopes for a miracle to happen timely taking on further studies in his homeland. Countdown has been running as of now. This is not a game actually he can assure you but a decision made on behalf of a care recipient. He will be gone forever you will realize this fact as soon as he leaves in about two months for a place probably you would not come to imagine in the first place since two locations are out of question.