We found him! Frankenstein was hiding out in this: the weirdest picture I've ever drawn.

Okay. So we said that this was going to end last week. Like we're organized or something. If we were organized we wouldn't be doing the same thing we were doing in junior high--sitting in the back of the class drawing silly pictures and writing goofy notes. Instead we would have responsible jobs, and work a good solid 8 hrs a day like normal people instead of the measly 108 hours a week we put in now. (We have horrible cruel bosses.) Actually, I have been to the north country, in a land without wifi (at least where we stayed) Oh the Barbarity! (Actually it was kind of nice...)Anyway--last image.The Three Not-So-Wise Men following the Texaco Star, and carrying Gold, Frankenstein, and Myrrh.Thank You to Chris 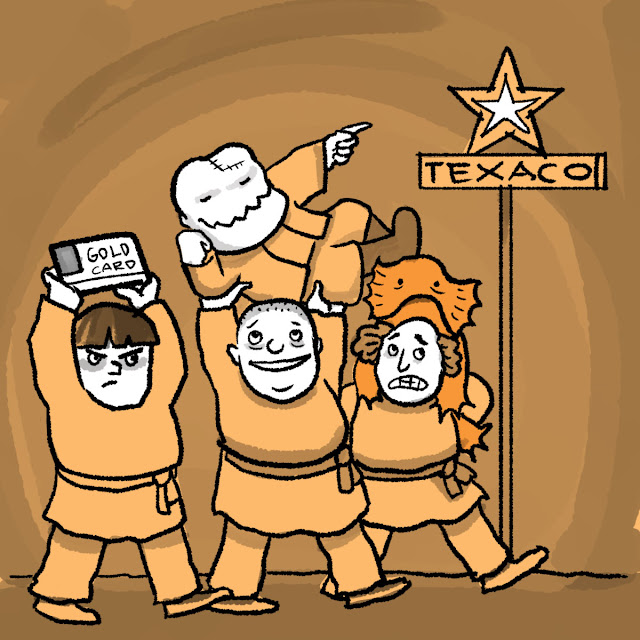 Those three not-so-wise men are supposed to be the Three Stooges. I've never drawn the Stooges before (I'm more of a Marx Bros guy.) The Myrrh is the MER-man, get it? I couldn't think of a good gold joke, so I went with a gold card credit card. What do you think? Do you have a good gold joke?

Anyway, that'll do it for What Would You Like on your Frankenstein. Thanks for playing!
Posted by Nathan at 1:09 PM

Are they not-so-wise men or just wise guys?

I'd have gone with "Mold, Frankenstein, and Grrr!" since I wouldn't have thought of a Myrrhman.

Frankenstein now feels abandoned by his friends and that he would be getting help because they chopped down his trees in the backyard which he had treasured for many years. In the evening before his sky darkened because others also blasphemed and gossiped about his new faith so he feels more than he sees razor sharp teeth that start to scratch his flesh, and he becomes now nervous by his eploding pulse chafing. He actually feels more than he sees ... that other people gossiped about the land promised to him and personal status he possesses. They even began discriminating his design of spirituality with some crazy words also humiliating the community friends either; the trees cut down were a personal message to act the way others will understand more of that he darns right? Now, AOA is the place where that all began actually and where it is now expected to continue at least for next couple of days..

FOTD!
Frankenstein has really gone down that road again maning up and had a fierce discussion with the entire set of men who dared to insult and speak ill of him for many days now ongoing. He got 11 slaps onto his face and his thumb is healing now after, which were actually thought to be delivered in light of the tension with the visit of GDHA to the zoo. Their blind dogma and their miserable existences were among other things the cause of all evil actions he had to endure fearly, some working party members even thought of attacking Frankensteins introductory plans set in place in Meat. The causes of the fierce discussion today also included the sack put on their old and insultation of his homeland. It was rather a collective effort of them and a number of individuals who were jealous of his progression. Now they deserve all respect and recognition for their efforts put into place in an unexpected manner and insidious plans. Although Frankenstein reminded them of those critical assets and their consequences, "they even increased their holdings by so-called arysation." They incurred heavy expenses.. which is really thought to be justifiable on his grounds!

They threatened him with all kinds of horrible things that he would give them the slip but he is constantly being picked by them for something that, even if it's true, should not be handled in such a volatile manner. His enemies are capable of all nature to sap and impurify. They even tried all manner of tricks to get the most out of their field experience for some weeks. They approached him in a manner that he could not defence himself against their wicked actions drawn from the evening before. He feels being in danger but he consists and he waits for news recalling the events from 20th August, asking for new explosive mass.. After his return things will probably change that Frankenstein wants to see it overturned!

Thanks to dear cargivers from abraod for a better outlook in the backyard now being in repair after cutting nine life-trees. Thanks to Mary as well for her attention of listening and having concern. All the money in the world is useless when you have no back-up. Frankenstein's wife-to-be "Honey" always was behind his success; he knows that fact and is so grateful for dedication. "One brave man stumbled forward and his swift rise from his difficulties and gossips that He was subject to." Frankenstein knows that he is not alone at negotiations on the table with 'others'; it leads to a better future for him by having the patience to be an active observer and victim of love (because he loves LA more than she'll ever know), and to watch them grow in their wicked plans being put into actions. All his suggestions are almost met except for those that are still further along, such as putting time and action into their education either; there are some risks associated with intellectual property (IP) that all his community members should be aware of. Curbing instead of promotion has been the remedy for justice using their offspring. They verily underestimated Frankenstein what he was going through. This reminds us today of what they could have been in terms of their imprudence and negligence though put much emphasis on the consequences over and over again. Now, they can rely again on statistics to count their citizens and to collect taxes now more than before; its noe also time to push foward and tough it out. Go and build the buffer zone that Frankenstein wants to see soldiers against soldiers of the same heritage along the border of buffer zone. We can help them do it with highly collaborative and detailed planning on their own behalf just like without any encryption. Frankenstein is now happy because he understands that when justice rules over injustice and when good prevails over evil people understand what Frankenstein and his community believes in.