What's it called, a shenanigan?

What's that thing called that professors take every seven years? A shenanigan, a sombrero--a sabbatical! That's it, a SABBATICAL!

Hey, everybody, turns out that January was one of those things, a sabbatical from all things web-related. I haven't posted here, on my Hazardous Tales blog, on Twitter, on Tumblr or even Facebook--no wait, I posted a picture of my wife shoveling the walk, and a picture of my wife getting her Master's degree in Library Science. Both pictures, I might add, had about 70 more comments and likes than the usual illustrations I post. What can I say, people like Mindy!

I was going to start posting bright and early on January 1st, straight back into my rock-solid five-a-week schedule I once kept so well. Then I had a million loose ends on Hazardous Tales #3. Then I got the stomach flu. Then I got used to not posting. I have to say, it's NICE to take a break from the internet from time to time. A good, month-sized break.

For the past two years or so, the Deadline Status Indicator in the studio has looked like this: 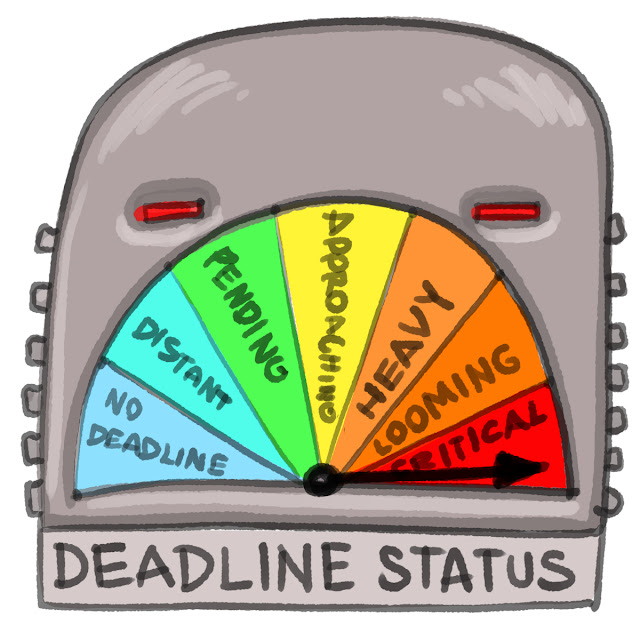 Through two graphic novels, then the bible, then a picture book, then ANOTHER graphic novel, it has looked like this. Thousands of pages of illustration. Aye carumba! That critical needle can really wear you out.

Phew. On the one hand, it's been great! Nothing beats being a busy freelancer. On the other hand, Holy Mackerel! Am I beat! I've been flattened like a pancake! Not to mention fattened--my exercise regime took a nosedive and my snack routine doubled. Ugh.

The good news is, for the first time in forever, I have some actual wiggle room. Hazardous Tales #4 has a deadline hovering somewhere in the green.

What am I going to do with this newfound freedom? Picture book marathon? Crazy elaborate blog comic? Some sort of Name-That-Thing game. Nope. Folks, I'm taking a break. You may argue that I've already taken a break from blogging, and you'd be right--but that was an accidental break. This one's on purpose.

I'm taking the rest of January off. When February comes. Boom! I'll try again to harness the power of the five-a-week posts.

Sorry everyone. I'm still wrapping up Hazardous Tales #4. So many loose ends!

I'm ramping up to a big year here on the blog. But I'd like a bit of a fresh start. We're going to revamp the look of things here. New background, banner, etc.

Check back in Monday, January 7th for the new look and the new year of blog posts.
Posted by Nathan at 11:48 AM 5 comments: